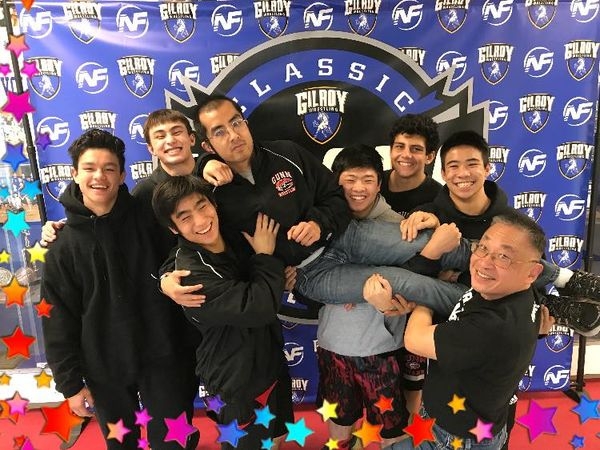 Gunn wrestlers after their participation in the Mid Cals at Gilroy. Photo courtesy of Emmie Fa.

Gunn brought six competitors to Gilroy’s Mid Cals. The toughest in-season tournament of the regular season, Mid Cals attracted not only eight of the top 10 California teams but also national powerhouses from around the country, with a total of 71 teams entered.

Junior Philip Doan progressed the furthest for the Titans, lasting six rounds to reach the top 12 of the 138-pound bracket. He edged a pair of Central Coast Section opponents before dropping a major decision to eventual fifth place finisher Bryce Dauphin of Tuttle, OK. Tuttle won the team title.

Seniors Dash Lee and Tim Waymouth made it to the second day of competition. At 182, Lee earned a fall and a major decision but was defeated by the state’s 10th-ranked wrestler.

Before the blood round, Lee wrestled a great match against Buchanan’s Caden Rodgers. Trailing 4-2 in the third period, Lee escaped and nearly took down the Buchanan wrestler in the closing seconds, who had already received a stall warning.

Waymouth wrestled with grit at 145, which had such tough competition that even the top seeded wrestler from Bullard, a two time state placer, finished sixth.

Waymouth ended his run with a 2-2 record, with close decision losses to Landin of Frontier and Sekhon of Central. Both Landin and Sekhon are top 20 ranked wrestlers in state.

Senior Koh Suzuki also finished with a 2-2 record. Drawing Gilroy’s Noah Castro in the first round, Suzuki put forth a strong effort but ultimately was unable to pull the upset. In the wrestlebacks, Suzuki racked up two pins before falling to Bergstron of Foothill.